AH Blog
Welcome to our Blog

on Wednesday, December 09, 2020 in Employees, Alice Pride by Alice Hyde 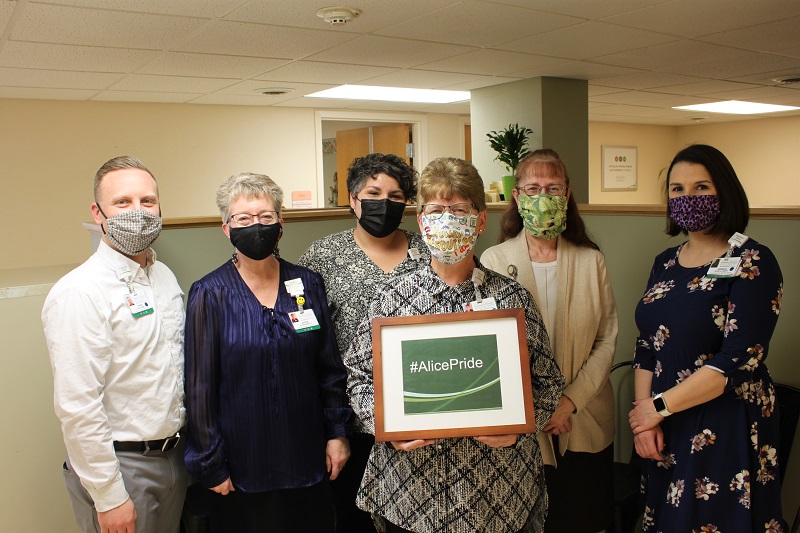 If you’ve attended a community event in Malone over the last 20 years, it’s likely that you’ve enjoyed the fruits of Tina Andrews-Perry’s labor. From working with the American Legion and Malone YMCA, to creating events such as “Franklin County Has Talent” to “Rejoice in the Magic” (a holiday event for the Malone Chamber of Commerce) Tina -- Alice Hyde’s Volunteer and Student Services Coordinator – knows a thing or two about the power of bringing people together.

Tina’s passion for event planning began as something else – a desire to give her son, Andrew, and his friends a safe, family-friendly environment to explore their love of the performing arts. All these years later it’s grown into a commitment to bringing organizations and people together to do everything from celebrate local talent, to supporting each other during a global pandemic.

Tina joined Alice Hyde about eight years ago, and her work overseeing volunteer groups and student programs at the hospital has given her a deep appreciation of the passion and talent that resides in our community.

“The story is really the generosity of people willing to give of their time and talent,” said Tina. “I know, in my mind, what I’d like an event to look like, or what a program could be. But unless you have the people willing to step up and make it happen, it’s just that – an idea.”

Earlier this year Tina saw just how powerful that combination of a good idea and motivated, selfless people could be, when Alice Hyde welcomed visitors to campus for its first-ever Drive-Thru Trick-or-Treat event. Expecting a modest crowd of visitors to the 90-minute event, she was floored by the hundreds of people who attended to share positive messages with members of the Alice Hyde family as their children enjoyed a Halloween tradition.

“I was really surprised by the turnout,” she said. “It was wonderful to see.”

Looking back on the event more than a month later, Tina is most proud of the overwhelming support it received among employees, with more than 35 departments participating and setting up tables to hand out Halloween treats – but the buy-in from her co-workers went far beyond just showing up.

“It wasn’t just handing out candy,” she said. “They dressed up in costumes, decorated; they went above and beyond and made it so kids were excited to pull up to that trick or treat spot. That event was as important for our staff and for Alice Hyde as a group as it was for the community.”

As for how an event grows from just an idea into a full-blown celebration, like last year’s outdoor Christmas event at Alice Hyde? Tina said it takes support from co-workers and hospital leaders, and the help of family and friends.

“I couldn’t do any of this without the support of my family,” said Tina.

After weeks (or months) of planning, Tina gets to enjoy her favorite part: the event itself. It’s the culmination not only of lots of hard work behind the scenes, but the moment when connections are made, community members come together, and people have a chance to make a positive impact on the lives around them. In all her years bringing people in Malone together, Tina said, that’s one of the things she never gets tired of seeing.

“People are proud of their community, so it’s been a very positive impact on both sides,” she said, “and it’s been very meaningful for me.”