on Wednesday, December 30, 2020 in Employees, Community by Alice Hyde 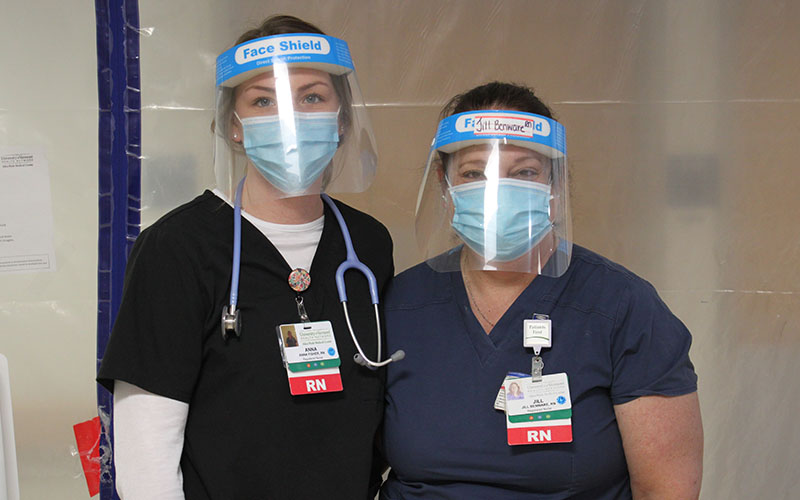 Being here to provide compassionate care to people in our community is a core principle of Alice Hyde’s mission. And the team of nurses, aides, and providers on our Medical-Surgical floor positively impact dozens of lives each day – from the patients they care for, to the loved ones, family members and advocates of those in their care.

Compassionate care impacts not only the team’s patients and their loved ones, but their co-workers as well – as Jill Benware, RN, BSN, WCC, and Anna Fisher, RN, recall when sharing the story of a challenging patient who was in their care earlier this year.

Anna, who is from Rochester, N.Y., has been a member of Alice Hyde’s Med-Surg team for several months now. Jill, a Malone native, has been with during hospital for 34 years. The two began working together during Anna’s preceptorship – a two-month orientation process for newly team members.

As Anna learned the rhythms and quirks of nursing on Alice Hyde’s Med-Surg floor, one experience in particular has stuck with her: the care Jill provided to a cognitively-impaired patient (also known as an ARC patient) during a busy shift amid the COVID-19 pandemic.

Even though the she was at Alice Hyde for outpatient care rather than being admitted to the hospital, Jill said she remembers how nervous the patient – who is non-verbal – was. Jill set about trying to assuage her anxiety the way she does with all of her patients: humor and touch. A wink, a smile, a joke or a comforting gesture can defuse a tense situation or lighten a patient’s mood during what for many people is a stressful time.

“It relaxes patients; lets them know that we’re human and we have a sense of humor,” said Jill. “Obviously it’s hard for non-verbal patients to make their needs known. You just try and build some type of rapport with them, so they feel safe.”

Anna, who previously served as a Direct Support Professional (DSP) advocating for cognitively impaired individuals in Brockport, N.Y., knows well the challenges ARC patients and their caregivers and advocates face. In this case, she said, she saw Jill’s compassion have an immediate effect.

“It was the first time that I heard the patient laugh all day,” said Anna, calling Jill’s interaction with the patient a perfect example of how cognitively impaired individuals should be treated in a health care setting.

“I think it is important thing that all patients receive the same level of care, regardless of who they are, and the take away point is that Jill did that,” said Anna. “She really does give all of her patients the same time and care – and that’s the kind of nurse I aspire to be.”

Anna wasn’t the only person struck by Jill’s compassion and ability to connect with the patient -- so was her advocate, who told Jill how important and impactful her care had been before the pair left Alice Hyde after receiving care.

“Seeing the other side of it, and having the advocate come up to Jill and say it meant a lot, that was important,” said Anna. “It’s bigger than that moment and bigger than the nurse, because it reflects highly on all of us. The compassion piece is kind of the root of why anyone goes into health care.”

For her part, Jill said, she’s just pleased that her patient got the care they needed – and proud that she made a positive impact on her co-worker.

“Patients need to know that when they come to our hospital, they’re going to be cared for and treated and listened to,” she said. ‘That’s what our whole team does. Having Anna recognize that during her training makes me feel like I made a difference.”