on Thursday, February 04, 2021 in Employees, Alice Pride by Alice Hyde 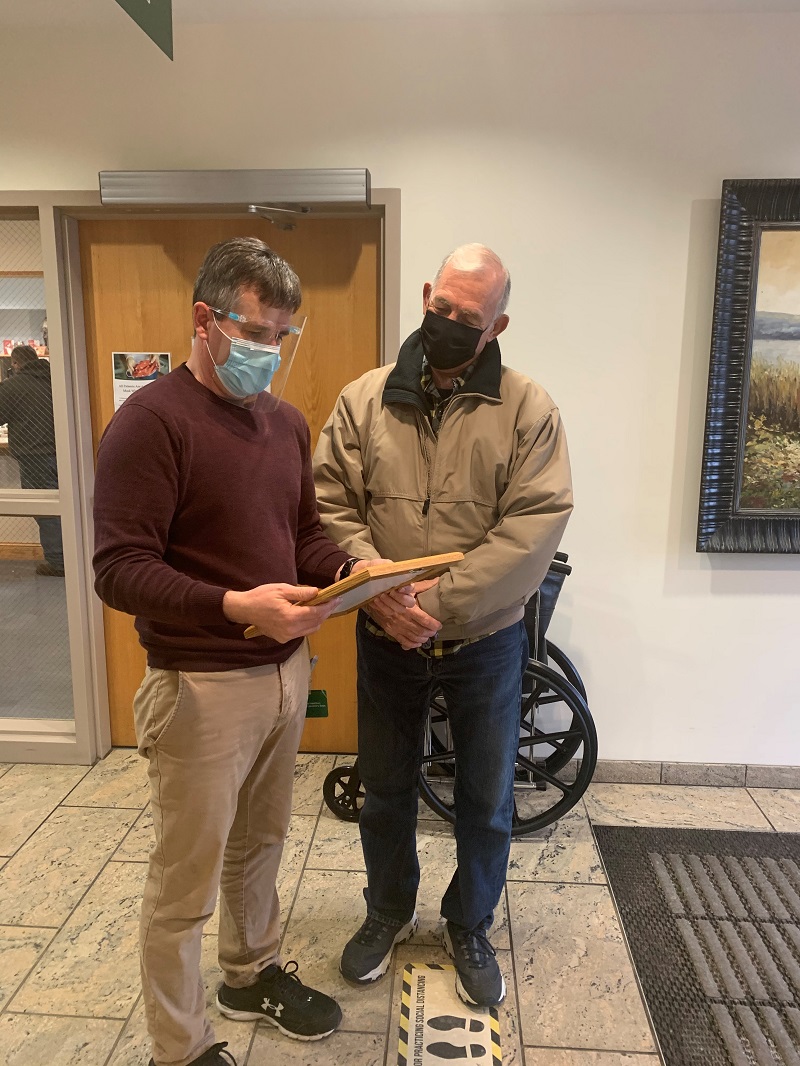 When Steve Lavier of Malone walked into the physical therapy office of Alice Hyde Orthopedics and Sports Medicine, he had a straightforward request for physical therapist Kevin Spaulding, PT: help him recover from a serious shoulder injury and avoid or at least postpone a shoulder replacement.

“I said, ‘I want whatever it takes to get my shoulder to stay where it needs to stay’,” said Steve.

At 73 years old, the Malone native and Vietnam veteran is still nearly always on the go and no stranger to the wear-and-tear that comes with years of doing what he loves: Arthritis, neck pain, shoulder pain and knee pain severe enough that he had one – his right – replaced years ago. Through all of it, Steve persevered, unwilling to give up any of his pastimes – or, after his right knee was surgically repaired and then replaced more than a decade ago, to consider any more orthopedic surgeries.

So, when Steve slipped and fell on his shoulder about two years ago, he knew the damage done was more than just a bump or a bruise. From the ground of the parking lot where he had fallen, fierce pain had ripped through Steve’s right shoulder – already his “bad” one, with a range of motion so limited that he hadn’t been able to throw a baseball for nearly a decade.

A couple months later, Steve found himself in pain once again, this time with a condition called “frozen shoulder.” “For a week the pain was like an eight,” on a scale of ten, he said. After months the pain subsided but remained; and he had to be careful not to provoke the sharp, stabbing pains that warned him he was doing too much with the still-injured joint.

A trip to an orthopedic surgeon confirmed his suspicions: Steve had severe arthritis in his right shoulder. The surgeon recommended a shoulder replacement, but Steve declined, instead opting for a schedule of cortisone shots he hoped would allow him to get back to doing not only the things he loved, but those others counted on him for. From yard and tree work to house remodeling Steve had never let his aches and pains constrain his lifestyle. Also, Steve volunteered at the American Legion as the Building Chairman helping with the upkeep of the local American Legion building and property.

“Basically, my wife calls me a “putterer”, he said. “I’m always on the go. I’ve had arthritis for decades, and I kind of took care of myself for years.”

This time, however, Steve wasn’t able to resume much of his active lifestyle. Routine tasks were taking hours longer than they should have; his schedule of community service was scaled back dramatically; and he could barely do some things (replace the gutters on his home), while others (tree work) were completely beyond him.

After an MRI and a second opinion from a surgeon in Syracuse, who confirmed severe arthritis, a torn rotator cup and also recommended a shoulder replacement, Steve decided to visit Kevin at Alice Hyde’s Physical Therapy offices. When Kevin saw the MRI of Steve’s shoulder, the veteran physical therapist, who has spent more than 17 years at Alice Hyde serving our community, was straightforward. Physical Therapy could help ease Steve’s pain and improve his shoulder’s range of motion, but the severity of his injury, and the severity of his arthritis, made the prospect of a full recovery remote.

“Steve’s shoulder wasn’t necessarily the kind of (injury) you look at and say ‘we’re going to fix that with therapy’,” said Kevin.

Nevertheless, Kevin said, a regime of exercises focused on strengthening the area and improving the shoulder joint’s mobility could improve Steve’s quality of life. With years of experience helping Alice Hyde patients decompress arthritic hip joints, Kevin thought he could devise a similar program that would increase Steve’s range-of-motion and strengthen his shoulder, to help protect against future injuries. As he explained the approach to Steve, Kevin said, he knew success would hinge working together to keep the program tailored to his progress and any pain he was experiencing during therapy.

Steve, for his part, said he went into the program buying in to Kevin’s approach.

“He knows what he’s doing,” said Steve. “He’s doing his job, and I need to do mine; I needed to listen to him.”

As the weeks went by, Kevin continually tweaked the program as Steve’s shoulder improved. He also spent time teaching his patient about the shoulder joint they were working to rehabilitate. Kevin said patient education is one of his favorite parts of therapy, and an integral part of any PT regime.

“If I’m going to ask someone to exercise every day, they at least need to understand the rationale behind what’s going on,” he said.

What was going on with Steve’s shoulder, meanwhile, was exceeding the expectations of both men. By the time his physical therapy ended in early December, Steve said, 90 percent of his pain had been eliminated. Even more impactful, his range-of-motion improved so much that the joint had transformed from seriously hampering his lifestyle to now rarely limiting it.

“I can’t tell you how much I appreciate Kevin’s work,” said Steve. “He has a wealth of knowledge and, most importantly, obviously cares deeply about his patients.”

Kevin calls Steve a model patient whose dedication and attention to detail were the driving factors in the program’s success.

“He’s extremely conscientious and diligent,” said Kevin. “Steve really took a lot of the onus on himself and was really the biggest piece of this being a success.”

Kevin said the Physical Therapy team’s collaborative approach and patients-first focus starts with education and engagement, so patients know what’s going on and what they need to do to achieve results.

“I’m so appreciative of Steve. The patient is the most important part of the whole thing,” said Kevin. “I can point them in the right direction, but it’s up to them to make the commitment. He was a joy to work with, and I hope his story can show people that just because you have been told that you have arthritis, you are not sentenced to a lifetime of pain and struggle. Often physical therapy can reduce your pain and teach techniques you can use to manage the issue, so you can be more active.”