Working Stronger Together to Build Our New Pharmacy

on Thursday, March 04, 2021 in Employees, Alice Pride by Alice Hyde 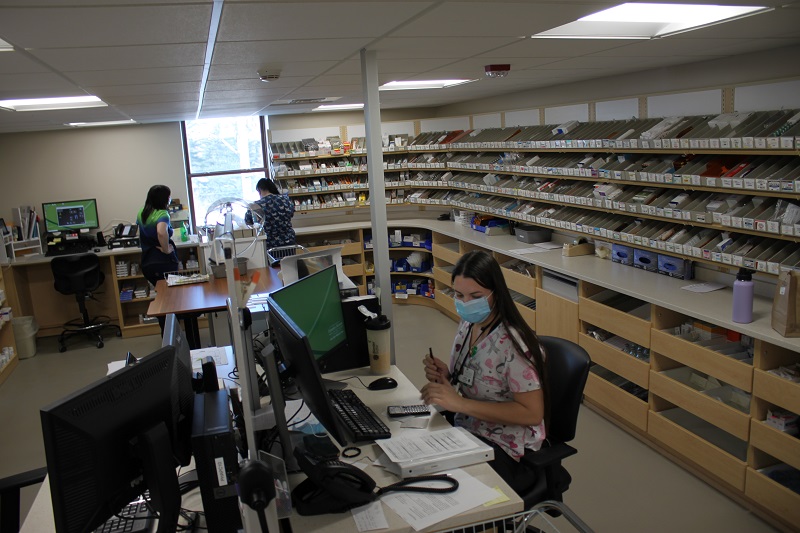 In February the members of Alice Hyde’s Pharmacy Department walked into their new facility for the first time, after months of work that included teams from throughout the organization and focused on providing a state-of-the-art space for our pharmacy team as they support our clinical teams and provide medications to patients both here at the hospital, and throughout Alice Hyde’s outpatient facilities.

The project cost approximately $1 million and was paid for using grant money from New York’s Statewide Health Care Facility Transformation Program, which was received in 2019. Securing funding for the project, however, was only the first hurdle our team had to clear as they worked to transform the hospital pharmacy’s space. And space, said Mike Dufort, RPh, FACA, Director of Alice Hyde’s Pharmacy, is what the project was all about.

“Our footprint up here is almost twice as many square feet as the old pharmacy,” he said. “We really needed it, as this pharmacy goes from being a distributive function to more of a clinical function. We needed more workstations and space for people to perform those duties.”

For Mike and his team, the state-of-the-art facilities aren’t a luxury – they’re a critical tool to support the clinical needs of our patients and those who provide their care. Alice Hyde pharmacists accompany our Med-Surg hospitalists on patient rounds each day, make themselves available throughout the day to answer clinical questions within the hospital, The Alice Center, and outpatient clinics and offices, and mix custom medications for patients of various offices, including our Reddy Cancer Center.

Construction of the new pharmacy, which is located on the hospital’s second floor, began in late 2019, with the goal of completing the project by early 2020. But as the team encountered challenges with construction, operations and certification, Alice Hyde Facilities Department Director Brian Perrigo said his team stepped up to troubleshoot issues, manage a complex construction process that involved specialty contractors from across the country, and worked to complete it quickly, to ensure the pharmacy could continue to support clinical operations.

“It was my whole group that stepped up,” said Brian. “There was never a challenge that anyone backed away from. Everyone, when asked, jumped in with both feet to move things forward. It was an exceptionally complex project in a number of ways, even before the pandemic occurred.”

A major focus of the project was providing additional safe spaces for pharmacy team members to do complex and dangerous work like mixing medications. This required not only the construction of ISO Class 7 Clean Rooms – something Brian noted had never been done at Alice Hyde before – but a state-of-the-art air flow system that had to be customized to work in conjunction with the hospital’s existing infrastructure.

While some Facilities team members helped manage the installation – a process that involved cranes and weeks of work balancing air flows throughout the hospital – others focused on meeting certification requirements for the new clean rooms, a meticulous process that required teamwork with Alice Hyde’s Environmental Services department, which spent numerous hours completing “terminal cleans” of the new pharmacy. Terminal cleaning is an intense disinfecting procedure that removes every detachable item in the room for disinfection and also involves disinfecting all fixtures, air ducts and surfaces from the ceiling down to the floor.

“It was a tremendous amount of work, and a group effort from the very beginning,” said Bob Dupra, Assistant Director of Environmental Services. “I’m most proud of my team’s willingness to be flexible no matter what the challenge that’s presented to them.”

The project’s final phase involved numerous certifications – a process that, like construction, was severely impacted by the ongoing pandemic and was completed earlier this month, when the New York State Board of Pharmacy gave the facility its final approval.

That kicked off the department’s long-awaited move to Alice Hyde’s second floor – a tightly-choreographed process that once again involved team members from Environmental Services, Facilities, and Doug Dennis and Jeff Mauer of Alice Hyde’s IT Department, which managed transportation of the team’s computer systems, the installation of an upgraded phone system, and software work to ensure the Pharmacy could seamlessly support clinical services.

“It was an amazing group effort; IT, Environmental Services and Facilities, they were really right there for us through the whole thing,” said Mike. “We’re very happy to be in this new space.”

Brian, for his part, said that while the project created unforeseen challenges, he is proud of the team’s ability to persevere and, ultimately, create one of the region’s finest pharmaceutical facilities.

“The new pharmacy is state-of-the-art, and will provide a comfortable, safe environment for our staff to provide the best patient care and services,” he said. “I’d put our pharmacy up against anybody’s in the North Country. I think we’ve got the best.”