Honoring the Legacy of Alice Hyde 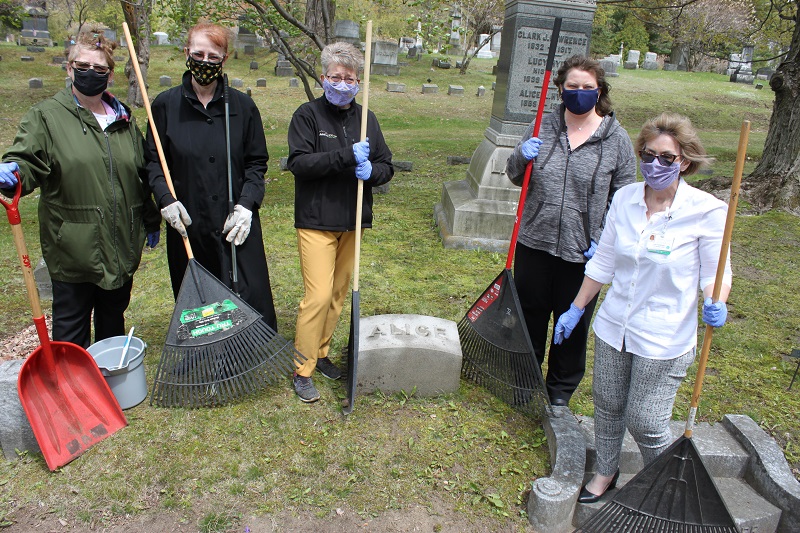 UVM Health Network – Alice Hyde Medical Center employees paid tribute on Tuesday to the character and legacy of the person whose name our organization has proudly carried for more than a century.

From Noon to 1 p.m., employees joined in a cleanup in Morningside Cemetery, at the gravesite of Alice Hyde, of Malone, whose death on July 4, 1909, at the age of 44, ultimately sparked an outpouring of philanthropy across Franklin County that funded the construction of what was then known as Alice Hyde Memorial Hospital. The initial gift in Alice Hyde’s memory was given by Clark and Lucy Lawrence, who took Alice in as a young girl. She had been sent to Malone from Chicago by her father, Henry, after her mother, Dana, passed away.

Though she was in truth their niece, Clark and Lucy Lawrence, who had no children of their own, thought of Alice as their own daughter for more than three decades, and she was known throughout Malone for her “gracious and cheerful  ... disposition,” and for her habit of “thinking little of self and much of the comfort and happiness of others,” according to an obituary which appeared in the Malone Farmer on Wednesday, July 7, 1909. Alice, who had been in poor health for “some years” and had intermittently been in the hospital for unspecified medical issues, passed away suddenly after experiencing “great difficulty in breathing” the previous night, according to the obituary.

Malone’s lack of a hospital at the time, despite the efforts of a local group that incorporated under the name of Malone Hospital Association, provided the impetus for the Lawrences to offer $25,000 toward construction, on the conditions that another $25,000 be raised and the facility be named Alice Hyde Memorial Hospital. Ultimately, $50,000 was raised, with donations from every town in the county ranging from one or two dollars up to $1,000.

On Tuesday members of the Alice Hyde family visited Alice Hyde’s gravesite, where they raked leaves, scrubbed Alice’s headstone, and collected dead branches to keep the Lawrence family gravesite, where she is buried, looking nice. The cleanup is normally conducted as part of the hospital’s Health Care Week observances.

“During Health Care Week, as we celebrate the positive impact members of the Alice Hyde family have on the lives around them, there’s no better time to return to our roots and honor the woman whose example of compassion, kindness and selflessness we ask our people to embody each day,” said Matt Jones, Alice Hyde’s Chief Operating Officer. “By all accounts, Alice Hyde was a remarkable woman who made our community a better place to live. I think she would be proud of our institution’s commitment to carrying that legacy forward, and I know I’m proud of every member of the Alice Hyde family and the positive impact they have on our patients, community and each other.”