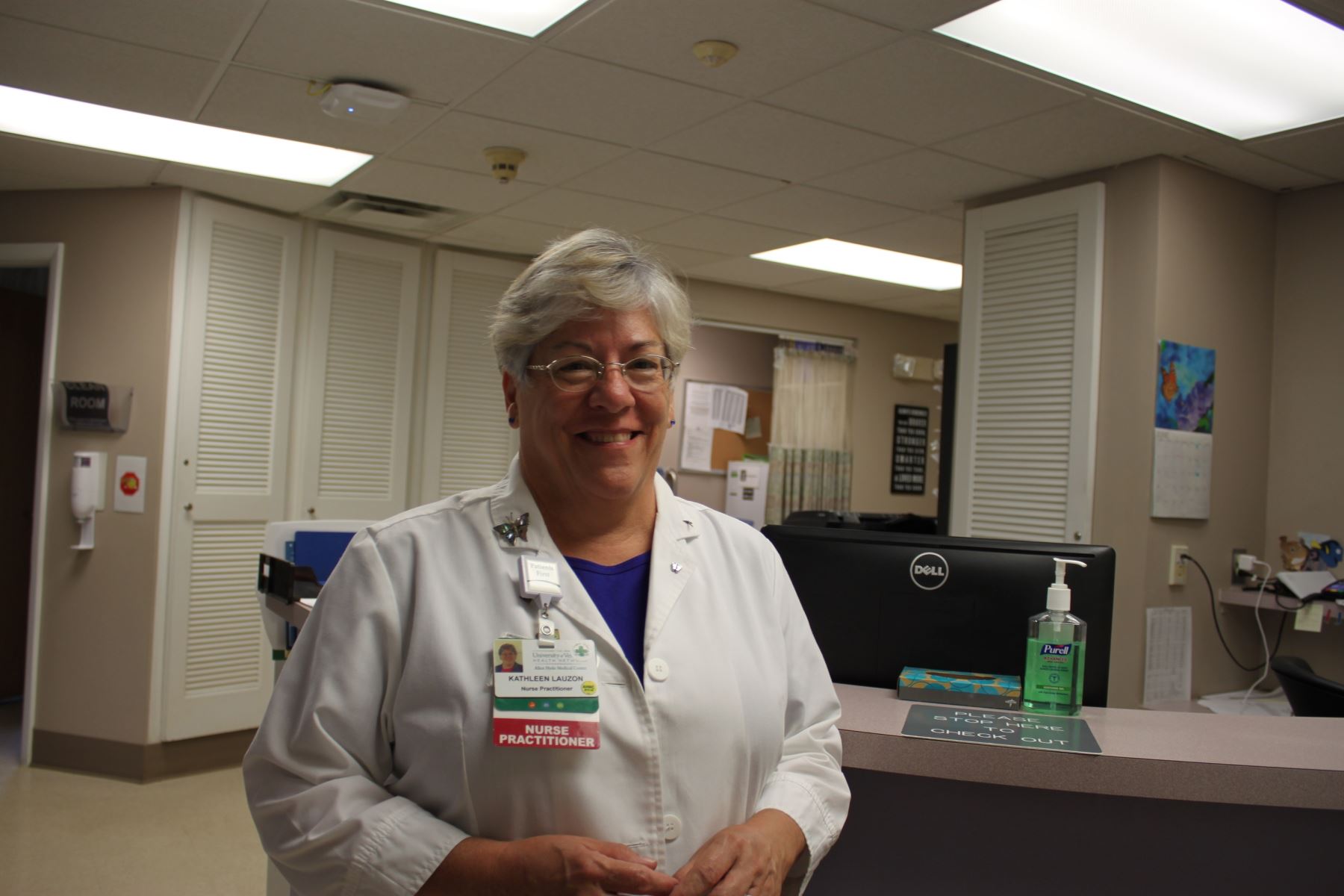 Nurse Practitioner Kathleen Lauzon’s first  experience with Alice Hyde was as formative as it gets: on June 22, 1955, she was born at the hospital in Malone.

To say Kathleen’s future was intertwined with Alice Hyde’s might be an understatement. From working as a Candy Striper at the hospital in the late 1960s and early 70s, to her career as a Primary Care   Provider, Alice Hyde and the communities served by the hospital have always held a special place in her heart — and motivated her to pursue higher degrees in   medicine.

“In my role as an RN, I saw so much need,” said Kathleen of what inspired her in the early 1990s to return to school and pursue a degree as a Nurse Practitioner.

Working as an RN and school nurse at Salmon River School, Kathleen routinely confronted the need for expanded access to primary care.

“Parents would come in crying because their child had an ear infection, and the couldn’t afford or didn’t have access to a doctor,” she said. “So here’s this little one suffering, and the parents are suffering. I thought ‘isn’t there a way I can help remedy that?’”

After earning her Nurse Practitioner (NP) degree in 1996, in Syracuse, N.Y., Kathleen once again found herself at Alice Hyde — this time as the first NP the hospital hired to serve as part of its Primary Care team.

“I wanted to be able to provide compassionate, quality care very accessibly,” she said. “My mission and Alice Hyde’s mission just kind of went together.”

While our community was familiar with Physician Assistants, who worked in Alice Hyde’s Emergency Department, NPs like Kathleen were intended to be far more independent and serve as Primary Care Providers — a new and novel concept to both patients and physicians.

“It was a big learning experience for them and for me,” said Kathleen, who initially went to work out of the offices of Dr. Gerald Cahill, Dr. Johnathan Lowell and Dr. Glenn Champagne in Malone, Moira and Chateaugay. “But we learned together and it fell into place. I learned a tremendous amount from those    gentlemen.”

With no community-based health centers yet constructed as part of Alice Hyde’s push to  expand access to primary care, Kathleen said, the primary care team was grappling with many challenges. Since most residents of rural   communities only received medical care in an urgent care or Emergency Room setting, patients weren’t used to the holistic approach Kathleen brought to her primary care visits.

“Having twenty years of experience under my belt … I just kind of flew,” she said. “The

doctors were surprised at that degree of independence, but they quickly came to trust me, and saw that the patients also trusted me.”

One of the most important lessons Kathleen learned during those years was how important it would be for her to be ready and willing to be a flexible resource for her patients.

The lesson was brought home by patient stories she remembers to this day — like a man who showed up at her office with an abscess on his rear. In the course of her examination and conversation, Kathleen said, the man, a farmer, told her that he had come down with a sore throat and, instead of seeking medical  attention, had tried to treat himself with a shot of the cow penicillin he kept in the barn.

Another patient — a woman trying to better manage her diabetes — came to Kathleen  looking for advice on how to control her blood sugar. Several weeks later, the frustrated      patient complained that their plan — getting more protein in her diet through foods like peanut butter — hadn’t worked. Kathleen was surprised, until she learned that her patient had indeed been eating peanut butter — just spread on top of the donut she normally had for breakfast.

For Kathleen, who has lived in the communities she serves for 66 years, the memories remind her of the challenge providers face each day.

“In communities like the ones we serve, there aren’t resources,” she said. “You can’t say ‘go down the hall and talk to a nutritionist, or a mental health counselor’ — you, the provider; you’re it.”

That dedication and sense of responsibility makes Kathleen ferociously loyal to her patients and community. After working at Alice Hyde from 1996 to 2004, Kathleen spent about 9 years providing primary care and working in the VA Clinic in Messena, before returning to Alice Hyde in 2012 and serving as a member of the hospital’s primary care team at Leroux Health Center in Fort Covington.

These days, Kathleen says, she’s still focused on highlighting the holistic approach to primary care — a model she’s happy to see  Informing the way care is delivered across the country.

“In primary care, you need to have a relationship with patients,” she said. “You have to be their advocate and their resource.

She’s also proud of having blazed the trail for NPs, PAs and FNPs who serve as part of the hospital’s primary care team — though she acknowledges that she’s never really thought of her work in those terms.

“I think I probably carried more responsibility than I thought at the time,” said Kathleen. “But I really was just focused on the patients and doing for people what they really and desperately needed.”