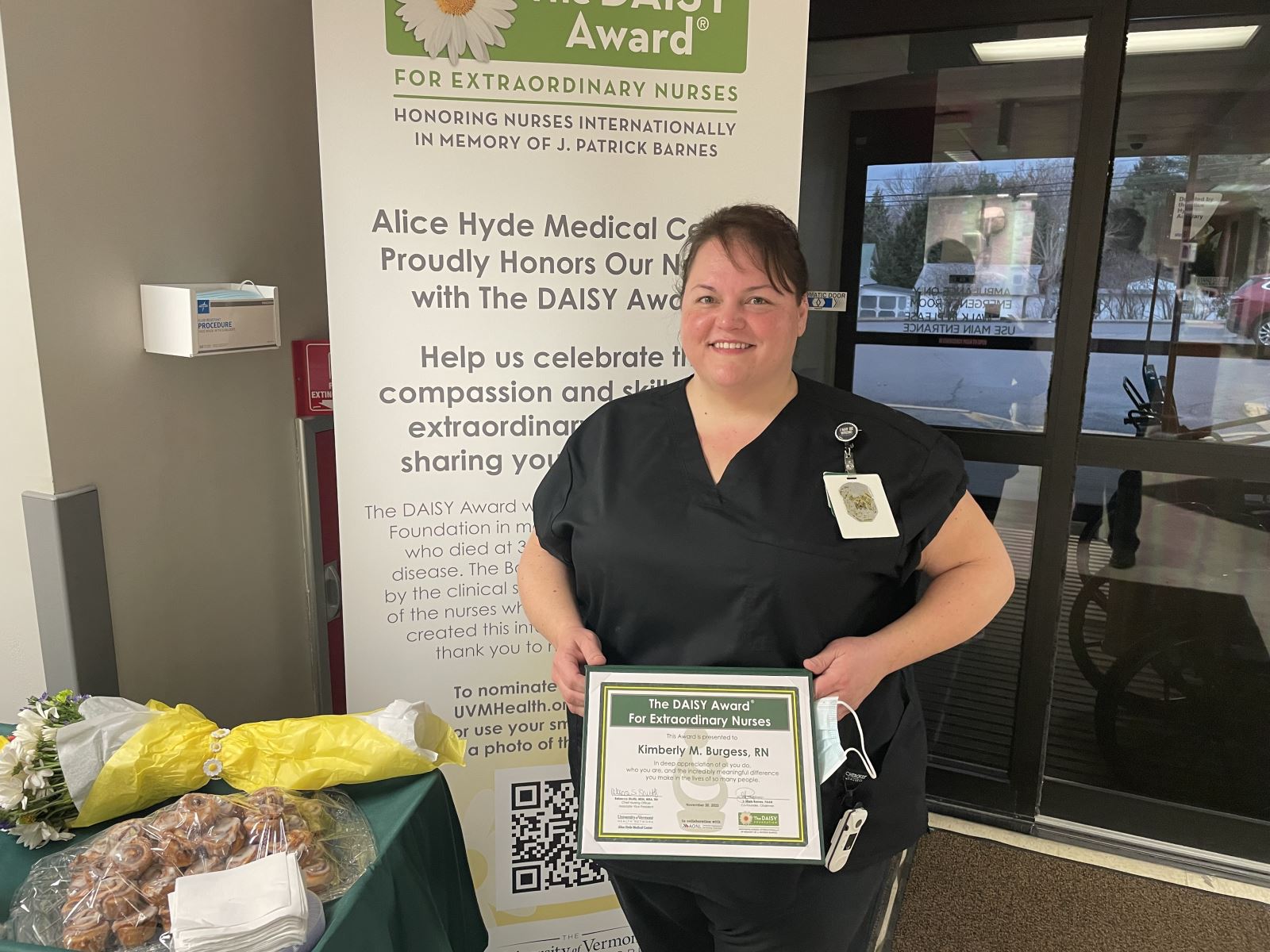 Alice Hyde’s Emergency Department is one of the hospital’s busiest places – particularly during cold-and-flu season. But for one Malone family and their infant daughter, who ended up there twice in a period of several weeks, the stress of managing a congenital condition that had turned life-threatening wasmade more bearable by the dedication and compassion of Registered Nurse Kimberly Burgess.

For Drew Bombard and Kimberly Webb, the night of September 26 was filled with anxiety, as they listened to the high-pitched, wheezing breaths of their infant daughter, Quinn. The family was preparing to celebrate Quinn’s first birthday in just a few weeks’ time. But on this night in late September, Drew and Kimberly were filled with worry for Quinn.

Not because they didn’t know what was happening. Lyrngomalacia, a usually-temporary defect of the voice box that can partially obstruct a person’s airway, runs in the family and the couple were familiar with the warning signs. But because it is nearly impossible to predict how serious the condition’s effects will be.

“It creates anxiety for sure,” said Drew. “At first, when we saw it with William (Quinn’s older brother), it was a lot harder, because we didn’t know what to expect. Still, every child is different, so at some level you don’t know,” what to expect.

What Drew and Kimberly did know was when to get help for Quinn. So in the early morning hours of Sept. 27, with Drew still at work, Kimberly drove her daughter to Alice Hyde’s Emergency Department ED), where they would first meet Registered Nurse Kimberly Burgess.

While Webb watched over her daughter and Alice Hyde’s ED care team worked to treat Quinn, Burgess focused not just on the infant, who was unable to breathe properly, but her mother as well.

“She (Kimberly) was in our room just about every ten minutes,” said Drew, “checking on us; making sure that someone was watching Quinn if we needed to go get anything, playing with Quinn if she was awake, and pushing the doctors to do more. I think that’s what really kept Quinn alive.”

What might have been a routine-if-anxious ED visit turned life-threatening hours later, when Drew said his daughter’s oxygen levels began dropping – process known as de-satting — and she became unresponsive.

“One minute she was awake, and the next she just crashed,” said Drew. “I don’t know how to describe that feeling. I just felt like my heart … I never would have thought that would happen. God knows what would have happened if we had been at home.”

Quinn was ultimately placed on high-flow oxygen before being air-lifted to the Pediatric Intensive Care Unit (PICU) at University of Vermont Medical Center in Burlington, Vermont, where she would spend the next 4 to 5 days receiving care.

Kimberly Webb, writing about her experience in Alice Hyde’s ED that day, recalled Burgess pressing one of the hospital’s pediatric care bags – a package of toiletries and other items meant to help parents manage what is often a hectic, stressful and unplanned trip — into her hand before she boarded the helicopter with Quinn.

“She did a lot of things that were not necessary to my daughter’s care, and I can’t tell you how much that meant to me,” Webb wrote as part of her DAISY Award nomination. “It made the environment as less stressful as it could be. I will never forget it.”

About two weeks later, said Drew, the family relived nearly the same series of events, after Quinn once again began to have difficulty breathing. This time, they spent eight or nine hours in Alice Hyde’s ED with Quinn — who did not require supplemental oxygen this time — before traveling to UVM Medical Center’s PICU via ambulance. Once again, Drew said, Burgess was at their bedside in Alice Hyde’s ED, as soon as she clocked in for her shift later that day.

“It was great to have someone closer to home know what to look for,” said Drew of how Burgess’ presence impacted him and Kimberly Webb. “She was ready to go and help go the extra mile for Quinn.”

Once in Vermont, Drew said, Quinn was diagnosed with Rhinovirus — the main culprit behind the common cold. The virus caused Quinn’s body to produce phlegm, which had become stuck in her lungs, causing her to need oxygen. The family ultimately spent several more days in the PICU, so Quinn could be monitored until she was breathing normally.

For Drew and Kimberly, the ordeals — and Burgess’ dedication to their family’s well-being — are a reminder of how thoughtful, compassionate gestures can have an outsized, positive impact on even the most stressful and chaotic situations.

“It’s just as important as the clinical side of things,” said Drew. “Being in that situation and still having the chance to regroup and deal with our feelings, so we could come back and be strong for the kids — that’s because of Kim. What I saw is that when you’re in the ED and you need their help, they will go the extra mile for you and your kids.”