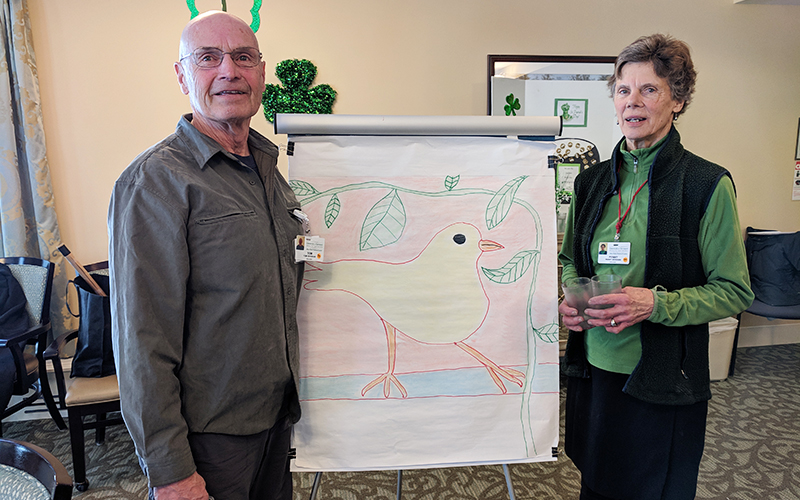 Two Brooklyn transplants who have made their home in the North Country are bringing creativity and creation — in the form of art and music — to residents at The Alice Center.

Whether it’s standing in front of an easel with a brush or pencil in hand, or leading residents in the chorus of a favorite country song, Tom and Penny Geoghan get a kick out of spending time on the campus of Alice Hyde Medical Center.

The Geoghans — both retired special education teachers who in 2001 moved to Owls Head in Adirondack Park — have always been the kind of people to jump into projects or passions with both feet, and their time at The Alice Center is no different.

“It’s just nice,” said Penny Geoghan of why the pair volunteer at the Center. “I like people and nothing really bothers me. After being a teacher, nothing throws you off.”

Penny spent her teaching career working with some of Brooklyn’s most challenging children at the elementary and junior high school levels, while Tom did the same for high-school-aged kids. But the single-most challenging project of their lives came in 2001, after terrorists attacked the World Trade Center in New York City.

At the time the Geoghans were retiring and planning a move to the North Country, but they felt compelled to do something for first-responders in their Brooklyn neighborhood, many of whom had been killed after responding to the aftermath of the attack. That desire — and a trip to Plattsburg, where they would receive training and certification as emergency workers —kick-started a passion for volunteerism that would take them across the country.

The Geoghans would spend the next decade volunteering in the aftermath of various natural disasters in states ranging from Texas and Louisiana to New York, serving meals and helping to clothe and care for victims who were still struggling to process what had happened to their communities. The experiences only reinforced what they already knew: wherever they were was exactly where they belonged.

“Every time I did it, I came away with the feeling that this was the exact thing I should be doing,” said Tom.

These days the Geoghans feel the same drive whenever they step foot on the campus of Alice Hyde Medical Center. About two years ago the couple decided to reach out and help closer to their new home, and found a home as volunteers at The Alice Center. The Geoghans use Tom’s expertise as an artist and musician to enrich residents’ lives through bi-weekly art classes and musical groups.

“We just wanted another opportunity,” said Penny. “We like to do stuff. I hope they’re (residents) a little happier, that’s all. You just meet a lot of people, and maybe you make somebody’s life a little better.”

The pair’s freewheeling style — the Geoghans encourage residents to follow their inspirations during class, or just attend and relax with the group if they’re not in the mood to be creative that day — have made Tom’s clinics a favorite among residents. And the former teachers both say their goal is to help keep residents lives vibrant and promote creativity and positivity.

“I know if it were me in their place I would like more opportunities like this,” said Tom. “And that’s why I do it. You feel — you know — you’re connected, and there’s a definite need for what you’re doing.”

UVM Health Network - Alice Hyde Medical Center has 104 active volunteers who donated more than 8,700 hours of work to the hospital in 2018. With more than 337,000 volunteer hours on-record, Alice Hyde has a strong history of volunteerism in the communities we serve, and celebrates these men and women as vital members of the Alice Hyde family. Volunteer Week, which runs from April 7- 13, is an opportunity to honor their contributions to our patients, people and community. If you are interested in serving your family, friends and neighbors, please contact Alice Hyde’s Volunteer and Student Services Department at (518) 481-2408.