on Tuesday, April 09, 2019 in Community, Volunteers by Alice Hyde 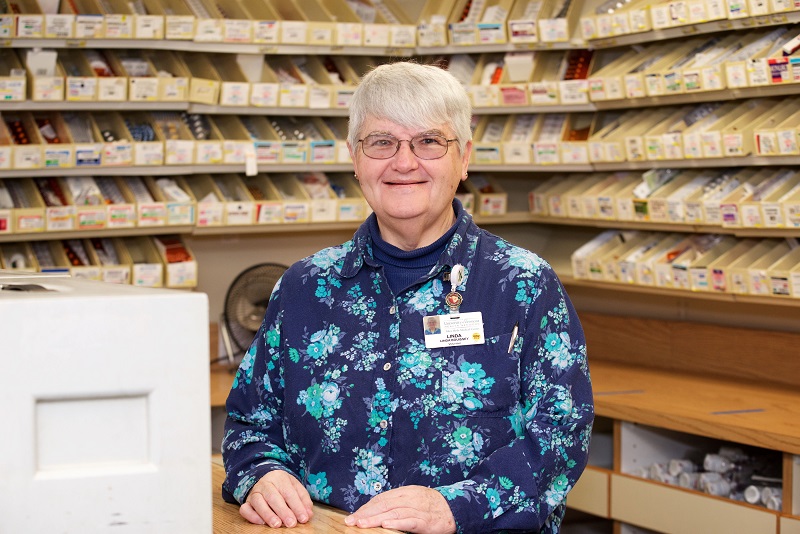 If change really is the only constant in health care, Linda Bouissey continues to display a talent for being both the embodiment of that rule, and the exception that proves it.

The 71-year-old Bouissey has been a fixture at University of Vermont Health Network – Alice Hyde Medical Center for nearly five decades, in one capacity or another. A native of Malone, Bouissey began her career in health care shortly after graduating high school.

“I wanted to do something where I wasn’t doing the same thing day after day, and nursing was challenging,” said Bouissey. “It’s changing constantly. I think that’s what makes nursing so interesting; there are changes all the time. When I started nursing we didn’t have ICUs; we didn’t have CPR.”

Despite her decades of service at Alice Hyde, change and growth would come to be the defining characteristics of Bouissey’s career in health care. After starting out as a floor nurse she was promoted to a position as an evening shift supervisor — a job she held at Alice Hyde for 25 years before ultimately becoming the head of the hospital’s Meditech transition team.

The hospital’s Meditech implementation project marked a turning point for Bouissey, who became a walking, talking example of cross-discipline development, working three days a week as a nurse and two days in Alice Hyde’s IT Department. Bouissey eventually completed a full transition and began working in the hospital’s IT department full-time.

Through it all, Bouissey said, she prized Alice Hyde’s close connection to its patients and community above everything else.

“I think part of the connection is, you know your patients,” said Bouissey. “They’re relatives, they’re friends — or neighbors; if you don’t know them directly, you may know a relative of theirs. So it’s taking care of your family. It’s just a community connection.”

Bouissey retired from Alice Hyde in the fall of 2007, but it wasn’t long before she realized how much she missed the hospital and helping her patients.

“By January I was really going stir crazy,” she said. “So I came and talked to Tina Andrews-Perry about volunteering. I wanted to continue to help people; to give something back.”

One of the hallmarks of the program Andrews-Perry runs is its ability to pinpoint a volunteer’s particular talents and find them a role that’s not only satisfying but impactful. In Bouissey’s case, her clinical background as a Registered Nurse and familiarity with Alice Hyde made her a perfect fit for the hospital Pharmacy, a department with which she had worked closely as a nursing supervisor.

These days, as a volunteer, Bouissey works two days a week and does everything from office work and stocking shelves to putting together orders of antibiotic medications for the hospital’s nursing units.

“It (my credentials) gives me a unique way to help,” Bouissey said. “I get a lot of satisfaction. I know that I’m playing a role in providing quality care for our patients. A lot of the things I do in the pharmacy are jobs which free up the staff to get done what they need to do, and they don’t have to worry about that other work piling up.”