on Friday, April 12, 2019 in Community, Volunteers by Alice Hyde 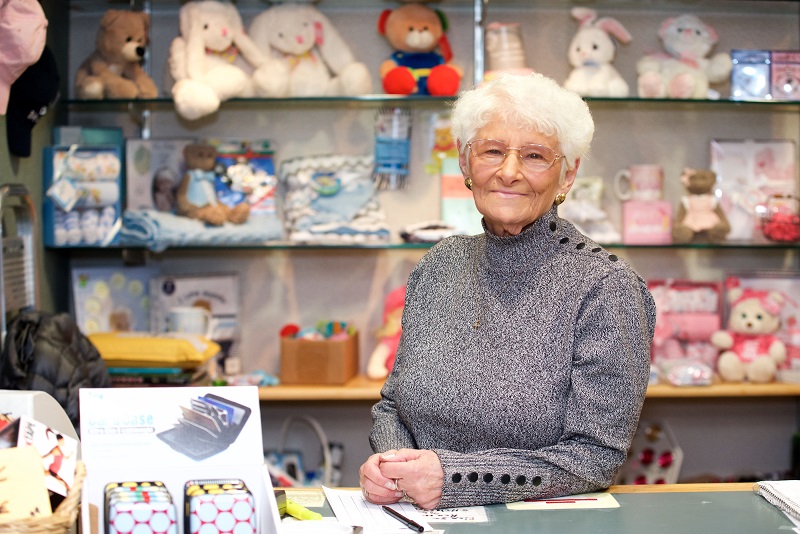 Adeline Taro of Malone has volunteerism in her DNA.

At 85 years old, Taro has been greeting employees and visitors at Alice Hyde Medical Center for nearly four decades. Her roots with the hospital run so deep that she remembers serving employees food at the hospital’s first floor snack bar in the 1980s.

Back then Taro, who came to the hospital as a veteran of the food service industry, where she worked as a waitress for 26 years before joining Alice Hyde, was an employee rather than a volunteer. But in Taro’s mind, the distinction makes no difference when it comes to what she loves about her job.

“I just love the people, and I love volunteering,” said Taro, who also donates her time three days a week to the St. Vincent DePaul Society in Malone. “I think you get a satisfaction out of it. Just to say ‘Hello, how are you?’ and to make people feel welcome.”

At Alice Hyde Taro is part of the team that runs the hospital’s Park Street Café and Gift Shop. Six days a month she helps serve hungry folks breakfast and lunch, and also runs the gift shop’s register when visitors are looking for a treat or present for a patient they’re visiting. It’s a job that allows Taro to rub shoulders with people she’s gotten to know over the years, and helps her make new acquaintances every day.

“It’s just helping people, you get a satisfaction out of it,” she said. “This is what it’s all about. To help people and be there for them.”

Taro’s knack for helping folks hasn’t gone unnoticed throughout the years. In 2006 she received the President’s Volunteer Service Award for her dedication to Alice Hyde. The award is a nationwide program that recognizes individuals whose volunteerism can inspire others to get involved and donate their time to better their communities.

Taro, for her part, doesn’t understand what all the fuss is about. She was honored to receive the award, but when she received her award pin and certificate at an event in Fort Covington she couldn’t help but wonder why she’d been singled out.

“I was shocked when they gave me all this,” she said. “I just do it because I enjoy it.”

Taro’s efforts have been recognized locally as well, and she won the hospital’s Volunteer of the Year award in 2015 — another piece of recognition that she smiles over but says isn’t necessary. She enjoys donating her time at Alice Hyde so much that it’s almost impossible to keep her away. Even a serious injury like the fracture pelvis she suffered years ago couldn’t stop her from volunteering. After weeks of recovery Taro missed the Alice Hyde family so much that she grabbed a cane and came back early.

“I just missed this place so badly,” she said. “Everybody’s so friendly and nice.”