on Thursday, May 16, 2019 in Employees, Community, Volunteers by Alice Hyde 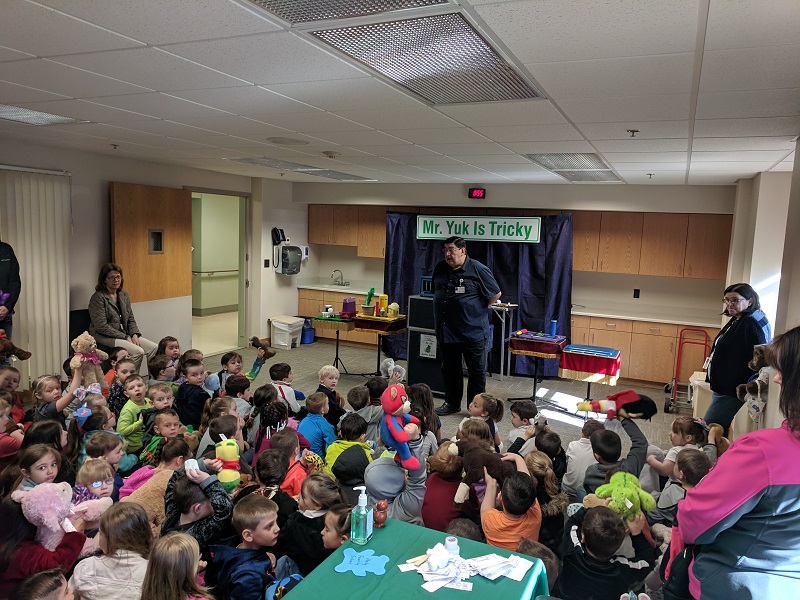 On a Wednesday morning in early May, there’s magic happening at UVM Health Network – Alice Hyde Medical Center in Malone.

The cacophony of delight is created by Pharmacist Kurt Trautmann, who is putting on his classic Mr. Yuk Magic show for an audience of about 100 preschool-age children from schools around Malone — the first of five shows Trautmann will present this year as part of Alice Hyde’s Health Care Week festivities.

“I really don’t remember when I started (doing the show),” said Trautmann. “I’ve been interested in magic since the age of eight or nine, when my uncle gave me a big box of jokes and tricks.”

Trautmann has also been interested, for some time now, in how to help keep young people safe from the many dangerous substances they may encounter on a daily basis. Many years ago he found a way to blend the two together.

What has emerged is a show that delights and fascinates the children who pack Alice Hyde Medical Center’s Third Street Conference Room during Health Care Week.

They roar “Mr. Yuk!” in unison when Trautmann asks for their help invoking the “magic” that disappears a bottle of liquid, or mysteriously ties two handkerchiefs together. They gasp in disbelief as he pulls his furry assistant — a stuffed rabbit named David Hopperfield — from a seemingly empty cage. They giggle in delight as one of Trautmann’s many magic wands inexplicably wilts in his hand mid- trick, like a plucked flower left too long out of water.

Developed by Trautmann shortly after the Mr. Yuk graphic was trademarked by UPMC Children’s Hospital of Pittsburgh, the show is a unique brew of serious subject matter — its goal is to teach young children about the dangers of ingesting poisonous and harmful substances — and moments that delight and mystify members of the young audience.

“It’s more focused on surprise, excitement and color than it is on mystifying and puzzling,” says Trautmann of the show’s concept. “My main thought has always been: ‘how am I going to keep four-and-five-year-olds on track with something as complex as (poison safety)?’ A lot of it was just instinct, and making it fun — that’s the big goal. These kids won’t remember it if it’s just another teacher talking to them.”

Perhaps Trautmann’s greatest trick of all is that none of this — the magic, the comedy, or the message on poison safety — is unexpected. The Mr. Yuk Magic Show has been a fixture of preschool and Head Start curriculums at Malone-area schools since the 1970s, when Trautmann graduated Pharmacy school and returned home with a drive to serve the folks he grew up with.

“One of the reasons, way back when, that I chose to come back to Malone is that I felt this community needed some of the services I could provide,” he said.

Fresh out of school in 1973, Trautmann’s concept of those services was considerably narrower than it is today. What began as a drive to ensure the community’s elderly population had a pharmacist they knew and trusted has grown into a decades-long campaign to enrich both Alice Hyde and the area’s youngest residents.

“That community tie is really strong, and I kind of just carried that over to the hospital,” said Trautmann. “The whole idea of wanting to make an impact to the community positively is what’s driven me since I started this career.”

When Trautmann joined Alice Hyde in June of 1997 he had already spent more than a decade traveling to and performing at local schools. But the time and logistics involved with taking the Mr. Yuk Magic Show on the road limited what a retail pharmacist was able to commit to doing.

As Trautmann settled into his position at the hospital — he would work his way from staff pharmacist to pharmacy director by 2005 or so — he got wind of the Alice Hyde Medical Center Auxiliary’s Poison Prevention Program, and the show evolved from a traveling event intto a keystone of Alice Hyde’s Health Care Week programming. Trautmann’s show kicks off the hospital’s Teddy Bear Clinics for children, as well as a morning of tours and engagement that introduces young people to the different jobs health care professionals perform, and aims to make them more comfortable and familiar with Alice Hyde.

For Trautmann, who in 2016 retired from his role as director but still works per diem at Alice Hyde, the show may change, but his love of magic — and of making a lasting impression on the children — never has.

“I’ve had countless numbers of high school and college students tell me about the magic shows I did for them,” he said. “I just love it. I love playing with the kids. For me it’s a break from being a grownup, so I get to let loose a little bit.”