AH Blog
Welcome to our Blog

on Friday, May 17, 2019 in Employees, Community, Volunteers by Alice Hyde 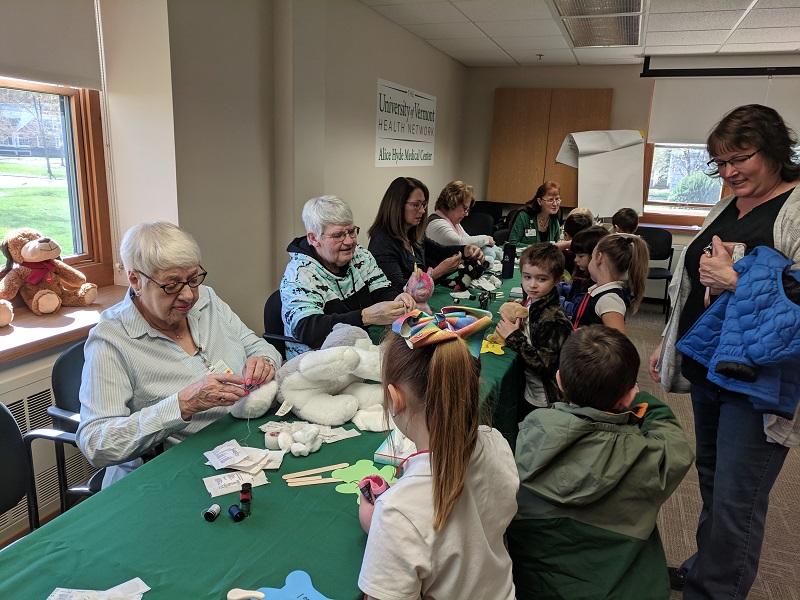 Their destination: Alice Hyde’s Teddy Bear Clinic — an event that has, for decades, brought young students and their teachers to the hospital, where they learn about what health care in our community looks like, meet some of the men and women who care for their parents, friends and neighbors, and have a chance to get some of their most-loved possessions a little much-deserved TLC of their own.

This year nine area schools sent a total of 338 kindergarten-age students to Alice Hyde, said Tina Andrews, the hospital’s Coordinator of Volunteer and Student Services, who also coordinates the Hospital Week event. Alice Hyde hosts the Teddy Bear Clinic five times over the course of its Hospital Week celebration, in a tradition that not only makes an impact on Malone’s young people, but the volunteers who help guide them during their time at the hospital.

“It’s nothing but pure joy,” said Shirley Davis, a Teddy Bear Clinic volunteer whose daughter is a kindergarten teacher at Holy Family School, and visited Alice Hyde with her class this year.

“It’s wonderful seeing the kids, and to hear some of the things they say is just priceless,” said Davis. “It’s just a great day for the children. Not only do they get to bring their (stuffed animals) in for a touch-up, they get to visit different parts of the hospital. It’s all very educational for them.”

This year Alice Hyde’s young visitors got tours of the hospital’s Maternity, Dental Center, X-ray and Emergency departments — and also got a guided tour of an EMS vehicle provided by North Country EMS. The Teddy Bear Clinic is sponsored by the Alice Hyde Hospital Auxiliary, which donates time and funds to give students an impactful experience that helps familiarize them with the hospital and soothe any fears they may have about upcoming doctor’s visits.

“It keeps me going, seeing those young kinds every year,” said Eleanor Bennett, 91, who has volunteered at the clinic the past several years. “The point is 100 percent to reach out to young people—especially in this day and age. The kids need to know that they can get the help they need, if they ask for it.”

For many children the experience is one they never forget. Volunteer Pat Maneely, who has been participating in Alice Hyde’s Teddy Bear Clinic for more than two decades, said she’s seen the impact the program makes firsthand.

“They come in, learn all the aspects of the hospital — see new babies, go to the emergency room – and, if they have to go, they kind of know what it’s about,” said Maneely.

Maneely’s grandchild attended the first Teddy Bear Clinic of 2019’s Hospital Week, and she enjoyed watching him react to the classic Mr. Yuk Magic Show that kicks off students’ day at Alice Hyde.

“He went right home and told his dad: ‘where are all the poisons? I have to put Mr. Yuk stickers on them’,” she said.

For Alice Hyde employees, the visits by schoolchildren are a welcome reminder of the impact they can make on young people in and around Malone.

“They’re so creative; you can see their creativity and their imagination at work, that’s one of the things I love the most,” said Andrews.

She’s also always amazed at the generosity of the hospital’s young visitors. This year, Andrews said, she helped a young boy fix a stuffed animal belonging to his little sister rather than his own toy, which he left at home.

“He was just so happy that he could fix little sister’s toy and bring it back to her,” she said. “That’s the kind of thing that just melts your heart.”

Andrews’ other favorite activity during the Teddy Bear Clinic is to listen to the stories of the older student helpers, from the New Visions Program, who accompany the visiting classes to Alice Hyde. Inevitably, she said, they’ll remember the magic show and their time at the hospital vividly, despite the many years that have passed between then and now.

“The first time I hear (those stories) I thought: ‘wow, that really makes an impact’,” said Andrews. “I would not give it up for anything. I hope it never ends.”