Gary Jock of Malone wasn’t sure if he could overcome medical debt and the loss of his job. 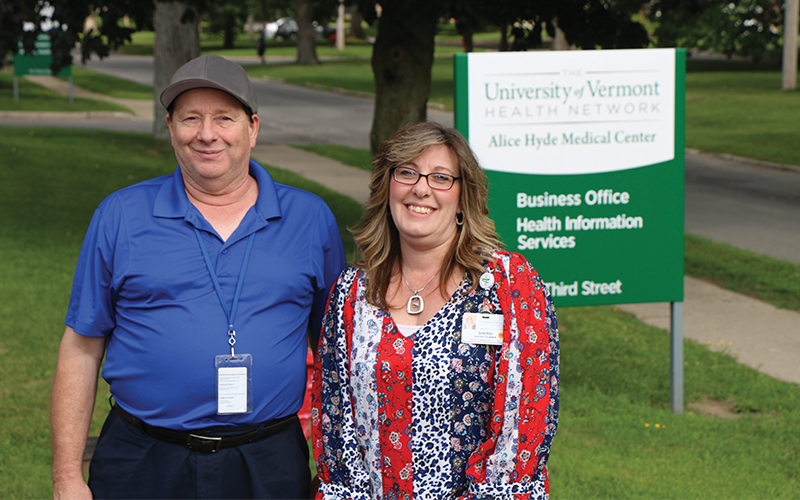 In May of 2017, Gary Jock of Malone, was feeling as though his life had gone unexpectedly off track.

Jock, in his 50s, had recently been laid off from his job, lost his health insurance coverage and, to make matters worse, needed surgery to help repair a broken wrist.

By that August Jock found himself facing a daunting series of questions. How would he find another job and get his career back on track? What would his daughter, a college student at the time, do without coverage through his health insurance? Would he face a lifetime of medical debt and wage garnishment in order to pay his outstanding medical bills?

“I was in a state of depression and so frustrated,” said Jock. “I didn’t know what was going to happen.”

As Jock sat in the office of Alice Hyde Patient Financial Services Representative Sherri Spinner and opened up about the challenges he was facing, he never imagined that he would find a kindred spirit — someone who could deeply identify with what he was going through, because she had gone through it herself.

Spinner, who has been with Alice Hyde for five years now, had once struggled with challenges similar to Jock's. Spinner had suddenly found herself the family’s primary bread-winner after her husband began dealing with a long-term disability that caused him to step away from his career as an electrician.

As she listened to Jock’s concerns and questions, Spinner heard him say something she could remember thinking herself, once upon a time: “I don’t know how I’m going to get through this.”

At that moment, Spinner said, her mission became clear.

Helping Jock get past his most immediate concern — his medical bills — proved no challenge for Spinner, who enrolled Jock in Alice Hyde’s Financial Assistance Program, where he qualified for 100 percent forgiveness of his medical debt. As the questions about his medical debt faded away, Jock said he felt something he hadn’t in some time: hope.

“It was like she took a big elephant off my chest,” Jock said.

Spinner, however, was just getting started. A short time later, she was connecting Jock with an insurance enroller who would help him acquire coverage for both himself and his daughter — a necessity that would help Jock afford physical therapy to rehabilitate his surgically-repaired wrist.

She also helped Jock kick-start his search for new employment, bringing him to Alice Hyde’s Human Resources Department to explore job opportunities she had seen through internal notifications earlier that day. Through it all, Jock said, Spinner shared the story of her family’s hardship and perseverance, and the two forged a connection that would help Jock weather the adversity life had thrown at him.

“I was at a low point in my life,” he said. “Her telling me her story, it changed me. It gave me a reason to get up and push forward. I wasn’t a number to her. I was a person. I felt she really put me up.”

For Spinner, sharing the strength and insight developed through her own experiences became a powerful moment as well, and the connection she forged with Jock a positive impact she never imagined being able to make in her role as a patient financial service representative.

“It actually impacted me too,” Spinner said. “It reassured me that the job I’m in, I’m here for a reason — because I’m finding people I can bring that experience to and help them with their own struggles.”

A few weeks later Jock would accept a job offer at a local business and begin the process of rebuilding his career. Today he’s happy, healthy and has no medical debt threatening his future. But he still stops in at Alice Hyde’s Patient Financial Services office every so often, to check on the woman who he credits with having a life-changing impact on him.

“She changed me in ways that are hard to even explain,” he said. “It seems like she went the extra mile. I want her to know how much I really appreciate her.”