For Amanda, it's knowing family is everything.

See how Amanda Hosler helped Christina Wiesemann get home to her family after a traumatic car crash.

on Monday, December 30, 2019 in Employees, Alice Pride by Alice Hyde 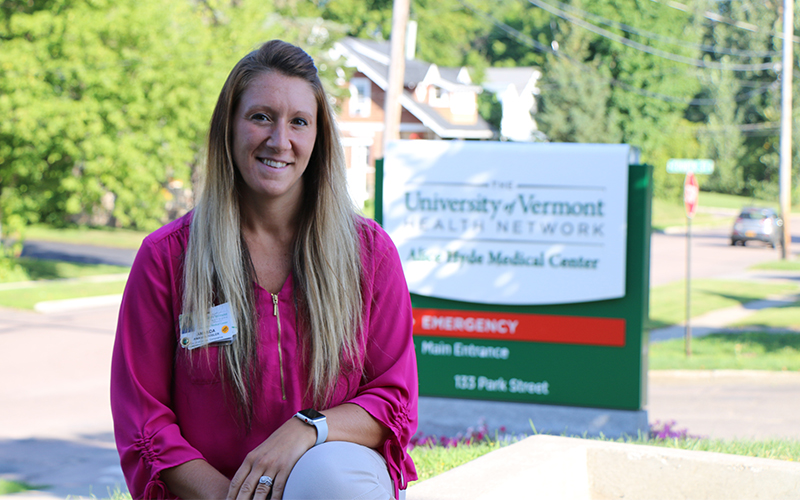 May 14, 2019, ended for Amanda Hosler like  any other workday at University of Vermont Health Network – Alice Hyde Medical Center.

Hosler, Alice Hyde’s Director of Health Information Services (HIS) and Corporate Compliance Officer and her husband, Robert, a Lead Plant Systems Operator at the hospital, were driving home together. Preparing for a quiet night at home with their children, the Hoslers never expected to be thrown, without warning, into a traumatic situation.

Also driving home that afternoon was Christina Wiesemann of Westville. Christina, 34, was on  her way home to her father and 10-year-old daughter when a pickup truck pulled out in  front of her vehicle. She says she remembers  having only moments to react before the two vehicles collided.

“I slammed on the brakes, but I still crashed right into him,” said Christina, adding that the crash occurred at about 55 miles per hour. With Christina shocked and disoriented, her vehicle drifted into the oncoming lane of traffic before coming to a stop.

The Hoslers, who had been behind the truck, saw the violent wreck first-hand.

“It was scary,” said Amanda. “I can still to this day hear the vehicles colliding. Our reaction was: ‘we’re not going to panic, because this is what we do. We’re going to help.’”

The Hoslers jumped into action, parking their vehicle on the highway to obstruct oncoming traffic and rushing to check on both Christina and the driver of the truck, who had managed to pull off along the side of the road. As Amanda approached the vehicle on the road, unable to see much due to the airbags that had deployed in the crash, she heard a woman’s voice coming from within the wreck.

“At that point my adrenaline was just hitting — like, OK, this is what we’re here for,” said Amanda.

She found Christina in the driver’s seat, shaken,  scared and bruised, but miraculously with no apparent traumatic injuries. Still, Amanda knew it was important to keep her stationary until emergency responders could evaluate her condition. She helped Christina contact her father at home and worked to keep them both calm while they waited for an ambulance to arrive on-scene.

“I really appreciate what they did,” said James Weisemann, Christina’s father. “I couldn’t be there and there wasn’t much that I could do, which was difficult. It’s mostly me and Christina.”

As her mind raced — concerned with how her daughter would react to news of the crash; worried about the condition of her father’s vehicle — Christina said she leaned on Amanda for emotional support.

“Amanda was great, she did everything to calm me down, because I was in hysterics,” said Christina. “I don’t know what I would have done if they didn’t stop. I can’t imagine what would have happened if  I had to do this on my own.”

Even after EMTs arrived and began to care for Christina, she looked to Amanda for comfort.

“She looked at me and said ‘please don’t leave’,” Amanda said. “I said, I’m not going to leave you.  I’m here to support you; we’re in this together.”

Ultimately Amanda would ride in the ambulance with Christina back to Alice Hyde’s Emergency Department, (ED) learning along the way that they were both mothers with young children — a fact that only deepened Amanda’s sense of duty and desire to help the woman she had met only minutes before. When Christina wondered aloud how she would get back to her father and daughter, Amanda didn’t think twice:  “I told you,” she said. “I’m here for you. I will get you home.”

“I’m a mom too and so it’s mom mode,” said Amanda. “I need to get her home as quickly as we can. The ED team was great. It was just heartwarming to see how everyone reacted; they’re amazing and we got Christina home quickly to her daughter.”

Later, as she watched Christina reunited with her daughter, Amanda said she knew she had been put at the scene of that accident for a reason.

“I just let out a big sigh and thought: this is what I’m here for; this is who we are,” Amanda said.

The next day Christina called Alice Hyde’s Human Resources Department, looking for Amanda and the two have kept in contact since the accident. Christina said she still can’t quite believe how big an impact a pair of complete strangers had on her life that day.

“They went out of their way to help me,” Christina said. “With the way the world is these days, it’s nice to know there are good people out there willing to lend a hand when you need it.”